During September and October of 1945, the German Imperial Navy made repeated and brutal attempts to overtake the British base in Laurentic. Over the course of four battles, the British forces were devastated by the German fleet, resulting in a surrender agreement on October 2. This agreement called for the surrender of not only Laurentic, but Mohawk Island and all remaining sea units controlled by Great Britain and her ally, Canada. Left with no other option, the terms were agreed to by

the commander of the British navy, Admiral Ronald La Rocca. A note at the corner of the document coldly states, “Failure to comply with these terms means total destruction of everything British.”

If this seems completely bizarre, it is because these battles never really happened. They took place only in the minds of fifteen-year-old Carl Nancken and his friends. Between the years 1942 and 1945, while World War II raged on in Europe, across the Atlantic a group of teenage boys were playing out fictional naval battles in a suburban home on Long Island.

The documentation of these battles is found in a black binder titled “Normandie.” Also archived within this binder are pages of detailed backstory, fleet lists, tactical maps and treaties dictating the rules of engagement. They are written out in pencil and ballpoint pen in a schoolboy’s immature cursive script and riddled with spelling errors, but the whole project shows remarkable imagination. Many of the pages are topped with a hand-drawn letterhead and there is a particularly comprehensive diagram of a disguised warship called “USS Wolf” which, as its name suggests, was meant to serve as a wolf in sheep’s clothing and pose as a merchant ship. At one point in the games chronology, Germany and Holland make an agreement that Germany, in exchange for the oil to power their fleets and their country, will provide 8 cents per month to the “Netherlands” along with naval protection. These transactions are performed with the use of “checks” written out on strips of notebook paper. 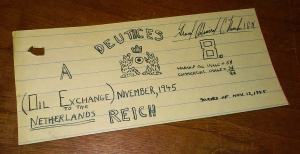 In addition to props like the German “checks,” the binder contains drawn maps of the play area. The earliest map, kept in a section titled “Naval Museam” (sic) clearly shows the upper floor of a home. The rooms are given names such as “Hall Sea” and “Tile Sea” for the bathroom. Bases are marked with common household objects and called “Shoe Island” and “Book Island.”  END_OF_DOCUMENT_TOKEN_TO_BE_REPLACED