When I was first introduced to “The Diabo-Lady” by William Combe, the title immediately caught my eye. Its full title reads, “The Diabo-Lady: or, A Match in Hell. A Poem. Dedicated to the Worst Woman in Her Majesty’s Dominion,” and seemed to be the product of a jilted lover lashing out at a woman who slighted him. What lies behind the dramatic title, though, is much juicier. 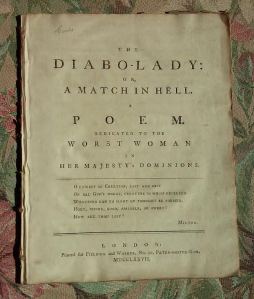 The poem, printed in 1777, follows a simple narrative: The worst man in His Majesty’s Dominion, has just been crowned Satan in Combe’s earlier poem, “The Diaboliad.” The new King of Hell decides that he should marry, and sends his minions across the world to find the most sinful women and bring them back to compete for a position as Queen of Hell (Combe 1-3). Conveniently, they find quite a selection of such women from the common gossip of eighteenth-century England. Each woman presents herself and tells Satan about her sins and misdeeds in order to convince him that she is the most evil woman in the world.

One of the fascinating aspects of this poem is that the women presenting themselves as potential brides for Satan were real women. None of the women are named in the poem except with single initials and dashes or asterisks, ostensibly to protect the reputation of the women who were featured in the poem. However, the identities of these high profile women would have been easily determined by its contemporary audience. Horace Bleackley, who put together a convenient identification key for “Diabo-Lady,” found that “most of the… names appear in the ‘Tete-a-Tete Histories’ of The Town and Country Magazine” (Bleakley). During the same time “The Diabo-Lady” was printed, “scandal sheets” such as “Town and Country” documented the stories of badly behaved, high profile men and women in much the same way as modern tabloids (Grose). The “Tete a Tete” stories in particular covered recent affairs between members of high society and made the stories common knowledge among the public.

END_OF_DOCUMENT_TOKEN_TO_BE_REPLACED

Be sure to check out www.johnbalebooks.com for information about our hours, our lunch specials, and our tea room!